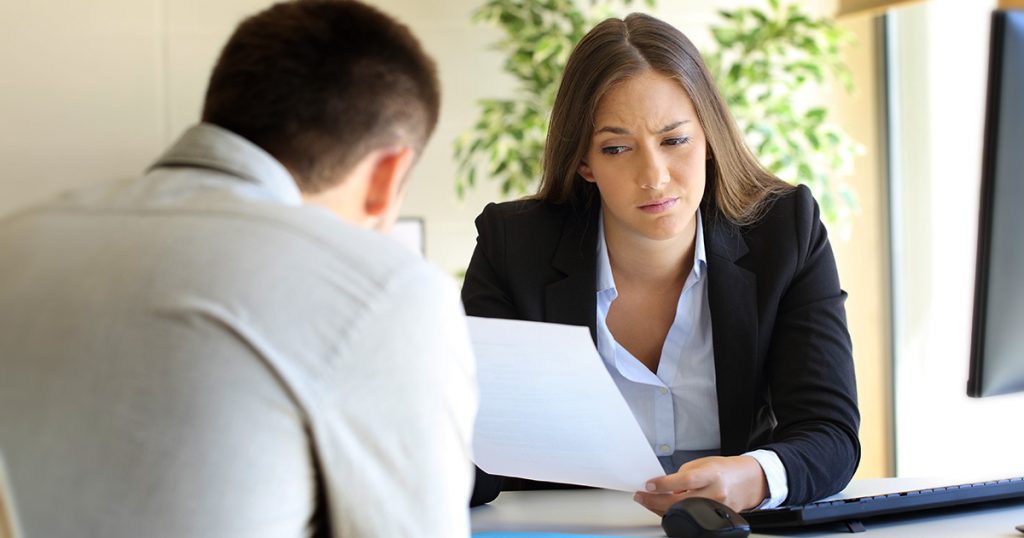 There’s nothing more important than finding the right person for the job. However, job candidates don’t always pan out the way we would like.

Some pharmaceutical recruitment hires seem like hidden gems on paper, but eventually prove to be duds.

This happens more often than hiring managers would like to admit. In fact, research shows that 46% of new hires fail within the first year and a half of work.

Knowledge and skill are both critical. However, they’re not the only traits that determine the long-term success of a hire.

The good news is that there are a few warning signs you can use to detect poor pharmaceutical recruitment hires early on.

Let’s take a look at 7 of the most common signs that your employee may not be working out.

It’s normal for people to be a bit nervous when they first start their new job. This can lead to errors on seemingly straightforward tasks, or asking other employees for help with processes that are second nature to other team members.

While working through the learning curve is acceptable in the beginning, it shouldn’t become a habit. You eventually want to see progress, particularly after a full week of work.

If an employee doesn’t show improvement over time, they may lack the focus or drive needed to be a part of your team.

Of course, you don’t want to write people off immediately. A person who struggles during the beginning may one day turn out to be one of your best hires.

However, the right person for the job will show consistent and marked improvement.

2. They Have No Desire to Learn

New pharmaceutical recruitment hires should be eager to learn.

In the beginning, you won’t run into this issue with most people. It’s easy to find motivation when you have a fresh job.

But some new employees aren’t as interested in learning as others.

Someone who is eager to learn will ask many questions. They will also appear engaged when you give them feedback.

Pay close attention to pharmaceutical recruitment hires that only nod their heads in agreement.

Even people who aren’t listening can nod.

You may also run into employees that are overconfident in their abilities. While confidence is good, that shouldn’t affect a person’s willingness to learn.

Ideal employees are always ready to soak up new knowledge.

3. They Have a Negative Attitude

You’ve probably encountered employees with perpetually pessimistic attitudes. You know how difficult they are to deal with. Negative individuals have a knack for ruining other people’s days.

In fact, research shows that the attitudes of our co-workers can be contagious.

If a pharmaceutical recruitment hire shows a bad attitude, it may be a sign that they’re not a good fit.

While some cranky people can be very knowledgeable and skillful, it’s not always smart to take the good with the bad.

Over time, the negative attitude will rub off on your team and damage morale.

The best employees are those who remain polite and courteous no matter how bad their day might be.

It usually takes a few months to uncover the inconsistent and unreliable employees. But sometimes you come across those that don’t even bother to make a strong first impression.

This is one of the biggest walking red flags.

If a new hire shows up late or falls short on a commitment within the first week of work, it shows that he or she is not fully committed to their job.

The same applies to hires who leave early from work or take excessively long breaks.

You won’t be able to rely on these employees when you need them the most. And if this is the way they behave right out of the gate – during the ‘honeymoon’ – they are unlikely to improve.

Everyone makes their fair share of mistakes. However, how someone responds to a mistake can be very telling.

Learning from your mistakes is important, but it doesn’t end there. You should be wary of a pharmaceutical recruitment hire who is quick to blame others for their failures. It indicates that they’re not a team player.

You want employees to be honest with you. You also want them to be selfless and willing to take criticism.

Someone who doesn’t hesitate to blame others is likely selfish. It also means that they’ll have a harder time improving.

6. They Do the Bare Minimum

Good hires usually go above and beyond their required expectations. They should also spontaneously volunteer ideas or help when they see that it is needed.

In comparison, bad hires are happy to do as little as they can possibly can. They’ll rarely take initiative to complete a task.

You know an employee lacks potential if they’re satisfied with doing the bare minimum. Instead, you want someone who is willing to do whatever it takes to succeed, even if they fail in the attempt.

This doesn’t mean that an employee should constantly blow your expectations out of the water. But they should be willing to step up when it counts.

7. They Are Quick to Take Credit

Some new employees enjoy taking sole credit for anything good that happens on the job.

This is an especially bad trait when paired with an eagerness to blame others (see warning number 5) when things go sour.

While meeting goals on the job is a good sign, it’s also expected. Nobody should go into work expecting to do poorly.

On the other hand, a good hire will be happy to celebrate accomplishments as a team. They’ll let their work do most of the talking.

A Word About Fitting In

Some new staff members may perform well on their tasks, but don’t quite fit as expected with the rest of the team. Maybe you suspect they have high functioning cognitive skills but poor social/communication skills, such as an individual on the autism spectrum.

Everyone is unique, and brings with them unique challenges as well as unique value. Your job, of course, will be to evaluate – early on – how the team works as a whole as well as the individual.

And see whether, through feedback, coaching, specialized process or assignments, you can have everyone playing to their strengths.

Even the best hiring decisions can turn out to be a mistake. Paying attention to these seven subtle signs will help you spot the red flags and avoid most long-term headaches.

If a pharmaceutical recruit triggers a warning signal, don’t be afraid to make changes as soon as possible, before they cost you too many resources – both motivational and monetary.

There are just some behavioral traits that you cannot fix.

One sure way to reduce the likelihood of running into these signs in the first place is to have an experienced partner – that specializes in your industry – working on your behalf. At Turesol, our deep expertise at assembling high-performing teams can dramatically increase your recruiting success.